For budding drummers, finding inspiration can be challenging. Sure, we can listen to our favorite artists on repeat, but they have already made it. Where is the struggle? The rejection after rejection before finally they get their big break.

Not only do we want to be inspired by fantastic music, but by their stories too. It is why more and more of us turn to movies for inspiration. Whether it's for a drum-focused soundtrack or documenting a drummer's path to success, we can find comfort and the needed inspiration to pursue our dreams.

Finding these movies can often be challenging. With so many films focusing on lead singers, solo artists, and their love affairs, drummers seem sidelined. But luckily for you, we are here to put drummers back on the map!

We have found the ten great drumming movies that are sure to get your creative juices flowing and you ready for your next big solo! Why not add some of these to your watch list today?

Without further ado, here are the ten best movies to inspire the drummer within!

Kicking our list off today is A Drummer's Dream. Alright, it's technically a documentary, not a movie, but stay with it. The documentary looks at seven of the best drummers in the world who hold classes and share their knowledge with the next generation of budding drummers.

A love of music is at the heart of this docu-movie, with a range of styles covered. From jazz, funk, rock, soul to Latin rhythms, you will hear it all! And first hand nonetheless! You will learn something from the documentary regardless of the style of music you enjoy.

Who knows? You might even find love or appreciation for a new style of music?

Up next is a classic and one you have probably already heard of. Whiplash is the movie that scored J.K. Simmons their Oscar, and it is no wonder why! The movie follows a jazz drum student and his obsessive professor, who pushes him to achieve his goals.

The movie features a fantastic blend of jazz scores and a compelling story between the characters that mesmerize you! What you can expect to gain from this movie is an insight into jazz drums and how music schools work. Obsessive professors aside, there is a lot to learn from the movie!

While you might have already seen it or at least heard of it, go back and watch it with a fresh set of eyes! You will not be sorry.

From the vault, The Gene Krupa Story, released in 1959, follows the famous jazz drummer, Gene Krupa. The music featured in the film is all played by Krupa, too, so you can expect an enjoyable soundtrack! We see the rise to fame and how it was spent on drugs and alcohol (sounds a tad like A Star is Born, right?).

The movie might seem a little cheesy compared to others on the list and movies released today, but the soundtrack itself is worth it! After all, who doesn’t want to listen to Gene Krupa play?

Okay, we might be cheating again with this one. Birdman isn’t about drumming or music at all, but the soundtrack is sublime. It's virtually all drums; great drums too. The movie even won an Oscar!

We follow an aging movie star desperately trying to revive their career in a Broadway production. The film is fantastic on its own but teamed with an outstanding soundtrack; it’s unstoppable.

What can you expect? Constant drumming with just a dash of other instruments at times makes it a real winner and inspiration for drummers across the country.

That Thing You Do

A movie written and directed by Tom Hanks will always be a winner, isn’t it? That Thing You Do is one you can watch with your family and get inspired by the music industry!

Set in the mid-1960s, we follow a young band on their journey to fame. The band's original drummer breaks his arm, and his substitute introduces them to the 4/4 rhythm, bringing that iconic Beatles sound to America.

It’s not as gritty and hard-hitting as other movies, but there is a lovely story, and you get to learn a lot about how show business works.

A Swedish movie with perhaps one of the most imaginative plots created! Sound of Noise follows a group of six guerilla percussionists who terrorize a city with their playing and are hunted by a tone-deaf, music-hating inspector whose job it is to catch them.

I know, I told you it was out there. The plot might seem a tad bizarre, but the film itself is hysterical and features fantastic editing that elevates the movie. What’s more, the soundtrack is fantastic. It features percussion on everyday items you would find in a city, inspiring drummers that need to think out of the box!

Not only will you hear an excellent soundtrack, but you will also laugh too! It’s one we wholeheartedly recommend watching!

Ginger Baker, perhaps one of the most famous drummers in the world, revolutionized the way drums are used, particularly in rock music. Beware of Mr. Baker is a documentary where he looks back on his work and career.

In particular, Baker looks at his work with the Cream, where he and Eric Clapton made history, and his work with Fela Kuti, the legendary African musician. Although Baker lives on a farm in South Africa, the documentary is a fantastic testament to one of the most influential drummers in music history.

You are sure to learn something from this documentary, and it is one worth watching!

The Drummer is a Hong Kong movie that follows a mobster's son. He has been hidden on an island to protect him from blood revenge, and it is here he turns from wishing to be a rock drummer to a zen Buddhist drummer. Quite a change of heart, isn’t it?

The movie is packed full of rick and Buddist traditional drumming, a combination we don’t often hear! It provides insight into Chinese folk music, Asian folk drumming, and Buddhism. It is sure to inspire you and remind you to explore a range of styles; you never know where music could take you!

Ain’t in It for My Health: A Film About Levon Helm

Yes, another documentary! This one follows the drumming legend that is Levon Helm, known best for being the drummer of The Band. In the documentary, he reflects on his history with the band, his playing, and you get to see him practicing for a band reunion after 25 years!

The documentary offers insight into one of the drumming greats and preserves a part of history that we cannot afford to lose. You see the skill and how well he performs even now that Helm is retired! It is sure to inspire you and continue to influence drummers for generations to come.

Featuring Armand Asante and Antonio Banderas, the vocals in the movie are fantastic. And when they are paired with the female voices, you get a great and emotional ride that will leave you inspired (and a little speechless). 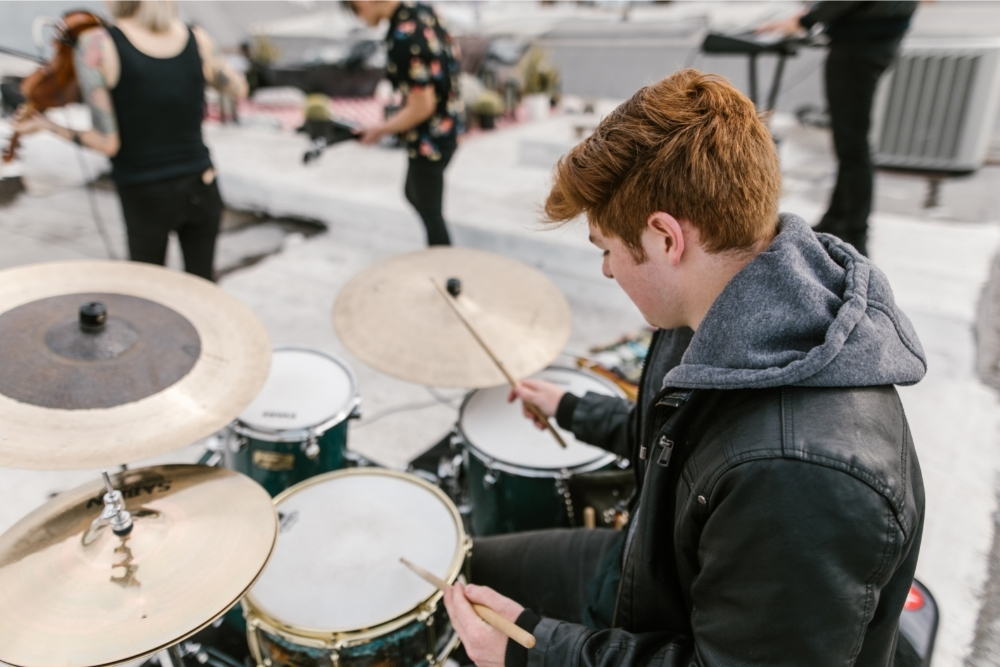 And just like that, we have reached the end of the list! Whether you are a film fanatic or a documentary lover, there is something here for everyone! No matter your preferences, we are sure a few of these will tickle your pickle and ignite your passion for drumming.

Not only will you enjoy a fantastic soundtrack and plot, but you are also likely to learn something new about drumming or the music industry. All necessary preparation for your drumming career, so pop one on, relax, and enjoy the beat!