When it comes to instrumental solos, drum solos are some of the best to experience, especially live, when the floor of the venue is beating in time with the drums.

There really is something special about it, especially when your favorite drummer has an extended solo that is not featured on the studio recording.

We have been lucky enough to have been graced with some absolutely outstanding drummers, whose solos have gone down in history. There are so many legendary performances and drum solos that spring to mind. 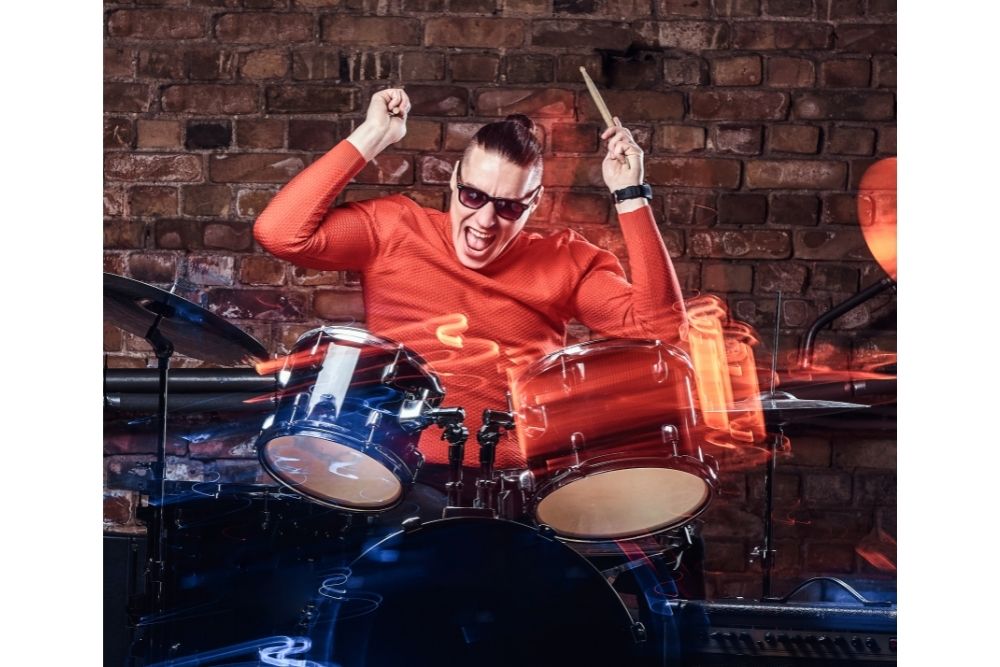 In this article, we have chosen 14 songs with some of the best drum solos of all time. It was certainly a tough decision, as there were many magnificent solos to choose from.

However, we think that we have come up with a list that covers a wide range of solos, from rock and roll, and classic rock, to nu-metal. We will be counting down from number 14 to our top pick!

His live performances were incredible, especially when raised and spun upside down, while still drumming perfectly.

While there are smaller solo sections in this Psychosocial, you have to give Jordinson credit where it is due. The drums are such an important aspect to this song, especially when the drum sections are extended when this song is played live.

The drum solo by Ron Wilson in Wipe Out is so iconic that we had to include it in our list. While it may not be the most complicated solo ever created, you cannot deny that it makes this song.

The drums are one of the key aspects to the song throughout and the way in which Wilson’s solos are incorporated is fantastic. When you think of this song, the drum solos certainly do stand out, especially when they are extended live and Wilson has fun with the solos on stage.

This may be a more controversial choice considering that it is well known that Ringo Starr was not overly fond of drum solos.

However, even though his solos were few and far between in The Beatles discography, the solo in The End is iconic, and showcases Ringo’s talent.

Keith Moon was a legendary drummer, there is no denying this. When you think of the best drummers of all time, you have to consider him. His drumming style was fantastic, and there was never a moment where his drumming sounded less than perfect.

When thinking about some of the best drum solos in The Who’s discography, the solo in Won’t Get Fooled Again is one of the best. It features at the tail end of the song and when he played it live, it was often extended. It is truly incredible to listen to.

While Avenged Sevenfold are a fairly new band in comparison to some rock legends featured, the talent of Jimmy Sullivan (The Rev) cannot go unnoticed.

He was an incredible drummer and his skills can certainly be heard in Beast and the Harlot, especially when you listen to the live recordings of this song.

My Generation is one of the most iconic songs by The Who. While we have already included one of Keith Moon’s incredible solos, we had to include a second one.

The drumming in My Generation is fantastic, especially when the solo was extended and played live. Keith Moon really knew how to perform the best and jaw dropping solos.

In at number 8 is a far more mellow song in comparison to our previous picks. However, it is just as impressive, and the talent of Steve Gadd is obvious. It is easy to see why he made it into the Modern Drummer Hall of Fame.

Steve Gadd is one of the most well-known session drummers. Aja by Steely Dan showcases 8 minutes of pure talent that we could easily listen to on repeat.

The drum solo at the beginning of Painkiller is another iconic solo. This is the first song on the Painkiller album, and the first in which Scott Travis drummed for Judas Priest - what a way to introduce yourself to fans! This drum solo is incredible.

Ginger Baker is another drummer that we had to include in this list. When you think of the best drum solos, for those who love rock music, Cream by Toad has to come to mind.

The extended drum solo is what makes this song. While this is technically an instrumental rather than a song, it is one that you can listen to over and over again and not get bored with.

The drum solo featured in Hot For Teacher is one that commonly pops up on incredible drum solo lists because… well, it is just that!

Alex Van Halen is such a fantastic drummer, and the drums in Hot for Teacher are more extensive than you may first think. During the recording of the album, Alex Van Halen played two drum parts that were layered on top of each other to create this well-known sound.

In-a-Gadda-Da-Vida is an absolute masterpiece of a song that is a whole seventeen minutes long. It can be argued that this song was revolutionary given that every band member features their own instrumental solo.

The drum solo that is played by Ron Bush just before the halfway point is the gift that keeps on giving. Lasting for over two minutes - it is iconic!

In The Air Tonight is one of the most iconic, and well-loved drum solos of all time. While many of the drum solos featured on this list are well known by those who enjoy rock music, some of these songs are not as popular with non-music lovers.

However, even those who are not that well versed in drum solos are likely familiar with In The Air Tonight. Most aspiring drummers will want to learn this song. If you are anything like us, you have probably air drummed along to this song in the past too.

What makes this song so iconic is its build up to the drum solo, especially when it is played live and is extended from around five minutes to over seven.

The way in which the music builds throughout makes the hairs on your arms rise, and then when Phil Collins finally reaches the drum set on stage and the drums kick in - it is everything a fan of this song could hope for!

For all the drum and music lovers reading this article, it will come as no surprise to you that Neil Peart is featured in this list. He was one of the best drummers in rock of all time. He was outstanding, and so incredibly talented.

Over the years, he has provided fans with so many impressive and jaw dropping drum solos, especially when playing live. But, we think all Rush fans can agree that the drum solo is YYZ is one of the greatest of all time. This is why we have chosen it as a close second.

Nick Peart’s drum solo in this song is jaw dropping, and never fails to impress, no matter how many times you listen to it. It does not get much better than Neil Peart!

While this was no easy decision to make, in at number one, we have chosen Moby Dick by Led Zeppelin. John Bonham is another drumming legend that is well known for his skills, even outside the world of rock.

While there were many solos to choose from, there was no doubt in our minds that Moby Dick would take the top spot.

The drum solo is over three minutes long and takes up the majority of the song. It is incredible to listen to, and is one that fans will never become bored with.

John Bonham was so talented and this song really showcases that.

That was our list of the 14 songs with the best drum solos of all time. We hope you enjoyed delving into some of the best songs for drumming.

There were so many options to choose from and this list is full of many absolutely incredible and talented drummers who have gone down in rock history.