Doesn’t matter whether you’re a PC gamer or prefer the comfort of a Playstation or Xbox controller - if you want to do some virtual drumming, there are a tonne of options. It won’t necessarily replicate a real-life drum set accurately, but it’s FUN.

You can play solo or with a full band on guitars and microphones, and even though it can’t replace IRL instruments, it can be great to pick up new rhythmic skills. Plus, it can help you train your hands and fingers to be more co-operative and co-ordinated. 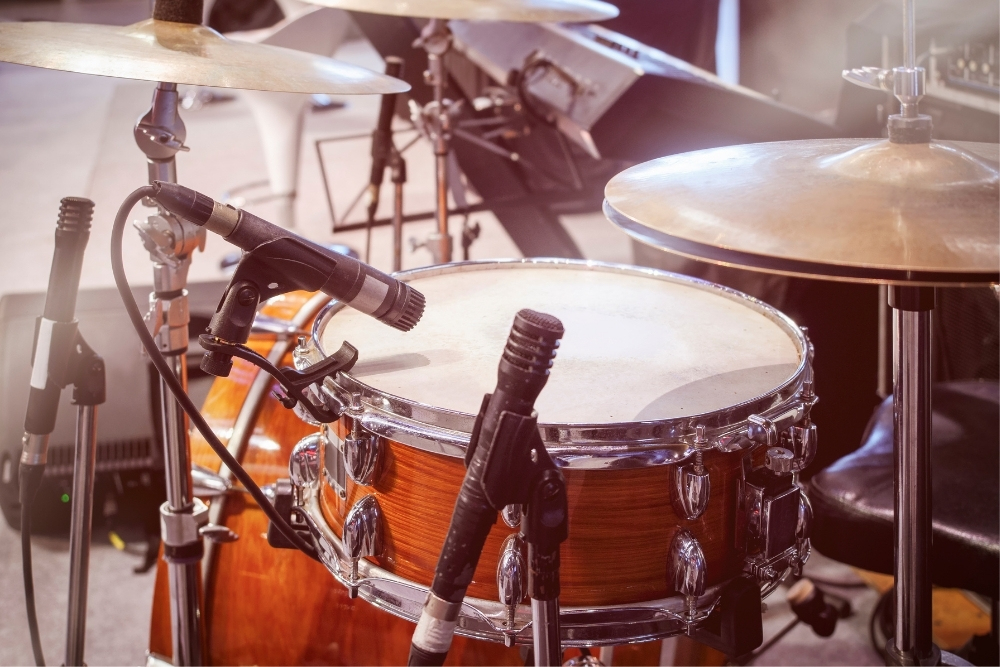 There are even drumming games for classic consoles like the Gamecube, or new and impressive systems like VR headsets and the Nintendo Switch. You’ll find examples for all players - just keep reading to figure out which one to get!

Everyone’s heard of Guitar Hero, but they changed the game in 2008 when they launched World Tour. For the first time ever, you could create a band and serve as any of the members, including the drummer! Co-op is great, with up to four players.

Their beautifully crafted replica drum set isn’t the most realistic: what you do get is five sensitive drum pads which, according to developer Activision, offer the “most realistic drum experience ever in a video game.” A pretty bold statement!

That’s a red snare drum, a blue tom-tom, a green floor tom, a yellow hi-hat cymal and an orange crash cymbal, as well as a bass drum pedal on the floor. It’s design helped develop patents in the music video game industry that Activision now own!

You can even hook up compatible MIDI drum kits if you’d like to use your existing instrument in the game’s Song Creation mode, wherein users can generate and share their own musical content.

Every single one of the 86 songs on the game are master recordings, and with “a pretty even split between the ‘80s, ‘90s and classic rock,” at least some of them are bound to appeal to your music tastes. A fantastic foray into drum video games!

The band simulator game that Guitar Hero: World Tour probably copied off, Rock Band is another rhythm game that’s popular globally. This time, you can play on your own or with up to six other players, which makes for an especially wild experience!

Your mock drums are similar in style to a modern-day electronic drum kit, including four basic pads and one pedal. This is slightly fewer than those on the World Tour drum kit, but could be better for a younger player or a drumming newbie.

If you really wanted to hook up an existing electronic drum kit, you can find a way to make it work on the PS4 and Xbox One, but it involves buying more controllers and being technologically savvy - so it’s probably easiest to stick to the included version.

There are four main Rock Band games in the existing series, as well as The Beatles: Rock Band and Green Day: Rock Band, so there are hundreds of songs to explore - simply have a search through the back catalog and decide which sounds good!

One exciting feature Rock Band offers is the “freestyle drum fill” section, allowing you to improvise your own rhythmic beats for a solo in the middle of a song. You can also upgrade the premium controller to be used as an electric kit outside of the game too.

First seen in 2004, any Nintendo fan will remember Jungle Beat and those infamous Donkey Kong bongos! Unlike the above, this isn’t a rhythm game though - you use the bongos to help DK through a bunch of side-scrolling Mario style levels.

Rather than playing songs, you’re instead swinging on vines, fighting enemies, grabbing bananas and riding jungle animals - of course, that doesn’t mean there’s no rhythm involved! It takes plenty of well-timed hits to conquer the jungle.

Players can also use a traditional GameCube controller if they like, or stick to the bongos themselves: the left drum sends DK left, the right drum right, and if you hit both at once he’ll jump! Clap into the integrated mic and he performs special attacks.

There are sixteen whole kingdoms to explore, with three levels each - the goal is not just to complete them, but to get the most “beat” points possible. These are obtained by grabbing bananas - if you perform in-air combos too, you get bonus points!

Plus, if you get bored and start to miss the rhythmic aspects of drumming, you can use the DK controller to play Donkey Konga or Donkey Konga 2, which are essentially like Guitar Hero, but with Nintendo songs… and no guitars!

First born and beloved by gamers in Japan, then released to great success across the world, Taiko no Tatsujin is an adorable take on the rhythm game produced by Bandai Namco and their newest release, Drum ‘n Fun, brings it to Switch!

Adorable music notes represented by the game’s mascots, Don and Ka, indicate the drum’s face and rim respectively - you must use the JoyCon as a drumstick, moving it up and down as though you are hitting a real life drum.

The vibrations you’ll get make for an extremely realistic feel, but this game in no way attempts to replicate the authentic drumming experience. This is definitely just one to play for fun with friends and family, rather than to try and get any kind of practice in.

There are plenty of popular Japanese songs to play along to, divided into seven distinct categories: Pop, Anime, Vocaloid, Variety, Classical, Game Music and Namco Original, as well as more available to download on via the Switch store.

You can enjoy the traditional two player game, as well as some brand new party games that are multiplayer for up to four. Since release, updates have allowed for online head to head competitive modes too, including tournaments!

If you’ve always dreamed of playing the drums but don’t have space in your house for a kit, Paradiddle could be the answer. In their flexible, responsive VR world, you can drag and drop as many drums as you want to play!

Arrange them however you like, scale them to be bigger or smaller with ease, and create whichever setup works best for your musical preferences! You can even save multiple custom drum kits and come back to them whenever you want.

There are countless sound variations: the drums will make different sounds based on several different factors, including how hard they were hit. Record songs, share them with others and watch your own playing for immersive, real-time feedback.

All you need to play is access to a VR headset compatible with the Paradiddle app, which can currently only be purchased through the Steam Early Access store or the official website.