Drum practice is a notoriously noisy business. It’s literally the practice of hitting one thing against several others for an extended period of time. Where there’s impact, there’s noise, and where there’s noise, there are frequently angry friends, neighbors…occasionally city officials.

So – how do you quickly, easily and conveniently reduce your environmental impact?

Sure, technically, you could build yourself a bunker and lock yourself away in there with your drums whenever the need to rock out, or the need to practice because you can’t quite rock out yet, strikes you.

But oh, the time, and the effort, and the mixing, and very probably the zoning laws and the building regulations, and –

No. Not practical. Scratch “Build an awesome drum bunker” off your To Do List.

So, how about soundproof curtains?

What the heck are soundproof curtains, and can they possibly work in a world otherwise governed by regular physics?

Firstly, let’s get to grips with an unfortunate reality. Soundproof curtains are very rarely, if at all, soundproof.

Terrific. Well, thanks for coming, we know this was a shorter article than you were hoping for.

Soundproof is a high mark to hit. Literally, soundproof means no noise escapes from one side of an obstruction to the other. At which point, the question “Have you ever seen a drum kit before?” raises its head.

Quickly followed by “Have you ever heard one before?” A drum kit is the heavy artillery of the music world. It’s the fury of a thunder-god and the blasting of cannon. Anything trying to be ‘proof’ against that had better be made of something more impressive than fabric.

Again, the vagueness of definitions isn’t terribly helpful. If you put any curtain between a drum kit and an observer, there’s going to be a reduction in the amount of sound energy that makes it through to them.

For curtains to be marketed as sound reducing – or even soundproof – they’re going to have to do something pretty special. Let’s take a look at what that is, and to what extent some of the leading soundproof curtains succeed or fail in delivering on the potential of their promises.

Best Soundproof Curtains at a Glance

Who Are Sound Deadening Curtains Best For?

Let’s do a little more expectation-management before we go much further.

First of all, let’s say it one more time in case, ironically, somebody didn’t hear us at the back. If you’re looking to totally soundproof your drum-den, you’re not going to do that with curtains.

Move right along and start thinking about how to create a room within a room in your home, garage, basement or Cold War freakout bunker. 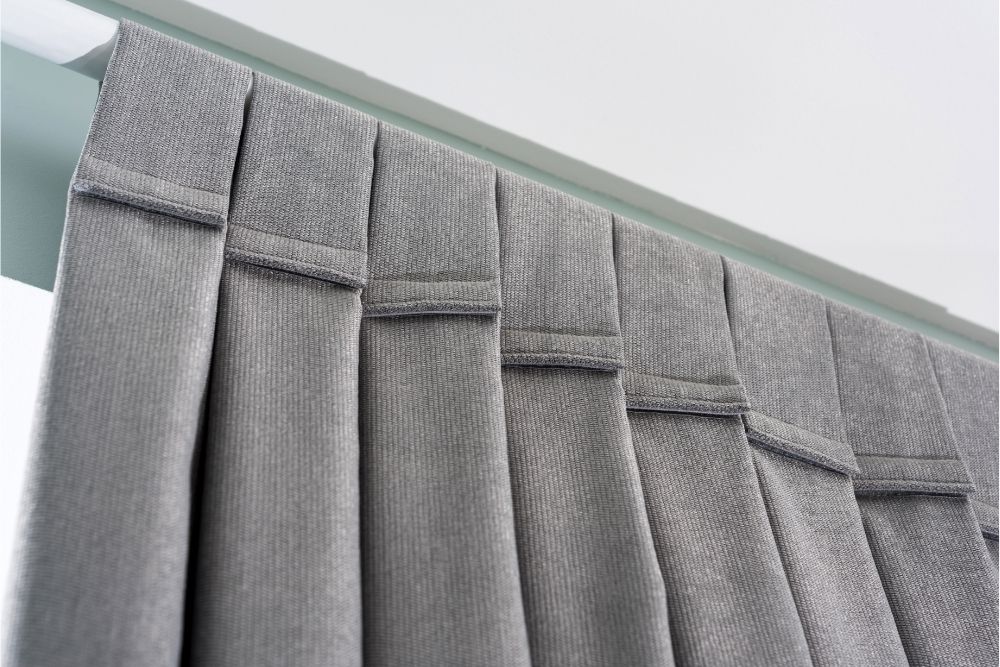 But among those who are generally judged to benefit from sound deadening or soundproof curtains are the following:

Don’t be raccoons in the trash. Get some curtains, show a little willing to help your kickass drumming session be good for those who need it, and not to traumatize the kidneys out of anyone else.

We had this discussion, didn’t we? Yes, they work within certain boundaries like the laws of physics, especially those related to energy waves. They will dampen the sound. They won’t stop it completely.

So they’ll work to some extent. Believe us when we say any extent to which they work to keep the sound of your drum practice from non-volunteer listeners is good.

They may not do enough to get you carried shoulder high for your consideration to others, but they’ll do enough to let everybody know that you’re trying to be both the next big thing in drumming and a good neighbor. Yes, at the same time.

You want to know how soundproof curtains work. Sure, no problem.

Under no circumstances pause to appreciate the wisdom of minimalist gurus. Stand in the center of the room, and give yourself a hand. Clap your hands, just once.

If you’ve given your ears time to adjust to the emptiness of the room, you should hear the sound of your single clap reverberating all over the room.

It should be fairly confusing, as the sound radiates away from you, bounces off every wall, maybe hits another wall at a different angle, and then dissipates.

If you give yourself a full round of applause, it will quickly sound like a cacophony, and will hang in the air for a second or so after you stop clapping.

If your room is barren with just paint on the walls, try standing in the center of the room and clap your hands.

Be sure to listen to the room. You should hear the sound of your hands ringing all around the room.

Now imagine that instead of just you, standing there, clapping your newfound devotion to decluttering, it was you, with a drum kit, in the middle of the room.

How much louder, more confusing, and frankly deafening would a round of drum-applause be, bouncing off the wall with all the extra percussive force of stick hitting drum?

This is what’s known as natural reverberation.

In large spaces, it’s essential – it’s how the concertgoers at the back of an arena get a large part of the sound of their favorite band – sound waves bounce off objects and change direction until they either hit something that absorbs them or run out of energy, when they dissipate.

Up close and personal, natural reverberation is, for instance, why the sound of a jackhammer outside your window can make you want to tear your own face off.

Or, come to that, how old-fashioned bell-style alarm clocks work – and why they pretty much make you want to tear your own face off too.

Here’s the clever bit. If you, for the sake of argument, were to go and stand in your closet and clap, the natural reverberation would be almost non-existent.

Why? Because of that thing about sound waves hitting things that absorb them. When things absorb sound, they rob it of the energy it needs to travel and reverberate against anything else.

Getting the idea? By hanging and using a good pair of sound-absorbent curtains, you can cut down the amount of sound that escapes your drumming chamber into the angry ears of your neighbors.

Other benefits of soundproof curtains

In fact, everyone’s even more of a winner than that, because soundproof curtains do more than deaden your drum beats to the outside world.

Who turned out the lights? – Having trouble sleeping while dawn pokes her intrusive fingers through your window and prods you in the face?

Thick curtains, of the kind you need to work as soundproofing, will keep the nosy sunlight out of your life till you’ve at least had your first cup of coffee.

Thermos curtains? – By keeping excessive heat out of the room in summer, and keeping it in during the winter is another thing for which thick, sound-shredding curtains are useful.

You’ll be happier, and your energy supplier will weep bitter tears while you laugh at all the money you no longer owe them. How much? Some studies claim that investing in thick curtains could save you up to 25% of your energy costs. Per year.

Unsocial medium? Don’t want people looking into your home, observing your life? Show them you are not a Real Housewife Of Wherever You Live – put some thick curtains up, and draw them for privacy.

Let them wonder what you’re doing in there, it will drive them absolutely crazy. If you want to let out an occasional blood-curdling scream, that’s on you. We didn’t tell you to do that.

What to look for in sound deadening curtains

When buying soundproof/lightproof/nosy neighborproof curtains, you need to consider the size, the weight, the materials, and some other crucial factors.

When you’re buying regular curtains, you measure the size by the size of the window. However, now you need to take sound absorption into account. Soundproof curtains need to extend more on both sides of the window than standard curtains.

Likewise, go ceiling to floor to get the most sound-shredding effect. Measure this twice – get it from and you could end up treading on your curtains with monotonous regularity.

What we don’t need in this situation is anything flimsy, lacy, or half-hearted. You want heavy curtains for better sound absorption.

Be sure…be very sure…your walls and any curtain rods you use can take the weight of heavy curtains. The last thing you need is for your curtains to pull the facing off your wall.

As well as heaviness, thickness is your friend here. Curtains labeled as having extra fibers? Yes, please. Suedes and velvets? Definitely – there’s a reason vampires dress that way – it keeps out the light.

Want some buzz-words to look out for? Heavy, tich, ceiling to floor, insulated, tightly woven. Yes, yes, yes – all these will be good at soundproofing your drum palace.

Curtains not cutting it for you? Neighbors still complaining? Try acoustic foam. These are panels that don’t cover up your window but can be added to your sonic vampire curtain fame to cut down the noise release even further.

What’s more, they have a creative legitimacy – they’re used in real sound studios, as well as in Youtbers’ home set-ups.